Go now, your lord is dead and can't even fight pollution.
Posted by JP at 15:42 4 comments

Yes, I realise I own more than one edition of Birth Of The Cool. 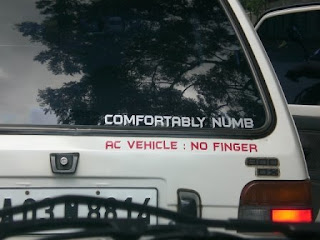 The Eagle's Throne by Carlos Fuentes.

In the year 2020, the Mexican president decides to defy USA with a couple of defiant policy declarations. In retaliation, Mexico's communications networks, provided by contractors who are fronts for US government departments, are suspended. In the ensuing confusion, Mexico's top politicians and king-makers revert to the written (or recorded in some cases) word to communicate with each other. The big topic of the day, of course, is who will succeed to the presidency when the incumbent's term ends 4 years hence. A variety of colourful characters conspire and counter-conspire to ensure that they, or their choice of candidate, will be the next to occupy the eagle's throne.

The epistolatory novel is not a common form anymore, and Fuentes strikes what I think is a delicate but functional balance, giving the correspondents subtle shades of difference in tone of voice while maintaining a certain uniform frame of references and allusions that makes for a cohesive read. After a slow, stage-setting start, the often melodramatic events start piling up. There are betrayals, unexpected alliances, sudden reverses and equally abrupt victories along the way.

So far, so good - this book functions quite well as a political thriller with literary aspirations. Some of the political insight is acute, some of it (such as Fuentes' characterisaion of Bush Jr's administration as one run on the basis of opinion polls) less so. Fuentes left the world of politics and diplomacy behind to devote himself to literature, so many of the observations on politics in general and Mexican politics in particular do carry a certain weight and interest.

At the very end, though, the novel suddenly finds its emotional centre in a very unexpected, completely peripheral character. It's this final statement, I think, that elevates the novel to something more than a formally unusual yarn of political scheming. I also found that, somehow the characters had come vividly alive in my mind, to the extent that I missed being able to read about them the evening after I finished this book. Not an entirely succesful book, I think - there's a bit too much soap opera in here - but certainly gripping and thought provoking.
Posted by JP at 13:03 0 comments

Flaubert's Sentimental Education was all about a conceited ass with a smattering of Wertheresque angst who goes on to ignore the great events of his times, aware only of his own vanity as reflected in farcical forays into public life and business and a series of grotesque love affairs. No one else comes off especially well either, and the ones who do seem to have a smideeon of humanity either die, or subside into lives of bitter failure. Not very optimistic, then.

The Eagle's Throne by Carlos Fuentes was surprisingly gripping for what is mainly a political thriller.

Lives Of Others is painstakingly crafted and intensely sad. It's also perhaps a bit naive, but wouldn't it be nice to believe for a moment?
Posted by JP at 11:39 0 comments

Dickens looms large over Rohinton Mistry's Family Matters. The melodramatic plot twists, the plethora of impossibly picturesque secondary characters, the constant teetering on the brink of sentimentality. Mistry is great at tugging at the heartstrings, and there are times when he goes a bit too far to make that violin weep. The tragedies and deaths are piled on as he tells us the story of a Parsi family in 1990s Bombay, grappling with the decline of their patriarch, Nariman Vakeel and their own individual choices, mistakes and conflicts. Some of the characters are quickly cast aside to be caught up with later as Mistry's narrative meanders from one focal point to another, sometimes seeming to lose touch with the rest of the story. Some of the actions his characters take seem dictated by the need to set up dramatic plot points rather than as a result of consistent character development.

And yet, despite all this, Mistry gets through to those heartstrings. I found myself caring about the people in this book, identifying with them and rooting for their family to reconcile and overcome its difficulties. In some ways they do - and in others, the final outcome is left hanging. The more things change, the more they stay the same, and Mistry leaves with a family in an uneasy state of harmony, held together by love and loyalry but with the cracks of dissent and prejudice still showing. In the process, Mistry in a somewhat slapdash manner also manages to paint a picture of Bombay, of its teeming masses and the many currents and counter-currents of hostility surging, sometimes more overtly than not, through them all.

I think what works in this novel's favour is that Mistry's compassion is real, and he writes about what he knows. In some ways this book is the anti-Naipaul. Mistry writes with a similarly crowded, often caricatured 19th-century model of the novel in mind, but where with Naipaul sheet talent compensates for a certain cynicism, it's Mistry's humanity that made me forgive his sometimes shaky novelcraft. Much the same way as the occasional, disarming, flash of humanity makes you forgive the teeming urban hells of India for their many failings.

Where is the titular snow country of Kawabata's 1948 novel (original title: Yukiguni)? Is it the snowy western region of Japan, a haven for vacationing men on the lookout for hot springs and compliant geishas, or is it a cold, perhaps numb place somewhere within the characters in the novel?

If that seems like a rather pretentious way to start this off, I'll apologise for my ineptness, and point out that I'm trying to mimic something Kawabata does remarkably well throughout this novel - to weave together descriptions of the surroundings the main character finds himself in with descriptions of his mental state and interactions with the people around him - and to somehow make each a metaphor or complement to the other. Don't take my word for it. Read the excerpt in my previous post and see for yourself.

Small shifts in atmosphere, in emphasis, in tone of voice or choice of words, outlined against the contantly shifting backdrops afforded by the picturesque snow country resort town and its inhabitants take on great significance in this most subtle of novels.

With both grace and economy, Kawabata unfolds the story of Shimamura, a wealthy dilletante from Tokyo and his liaison with Komaka, a geisha in the hot springs resort he visits. Shimamura is taken with Komaka's innocence and simplicity; yet unwilling to fully believe that her professed love for him is real and not the pose of a geisha, or indeed that any sort of reciprocity beyond a never-defined, sporadic relationship without even the status of patron and favoured geisha is possible between them.

Both of them are, in some way, empty people, pursuing what Shimamura thinks of as wasteful effort. Shimamura, at one time a well-regarded commentator on Japanese dance and expected to soon enter into the fray himself finds his hobby getting too real and transfers his scholarly attentions to western dance, despite never having seen a ballet performance, and refusing to see ballets put up by Japanese troupes. Mountain climbing, another hobby of his, is also seen as a classic example of wasted effort - once you reach the top you have climb all the way back down again. Komako reads everything she can get her hands on, from classics to trash, and keeps a record of it all in a diary that she has been maintaining for years. She doesn't try to analyse what she reads, or impose any quality control on it - she just reads omnivourously and keeps a record of it. She teaches herself to play songs using sheet music, with no exposure to actual peformance practise, creating a naive and affecting but essentially quaint and insular art of her own.

Between them are many shadows and obstacles - Shimamura's own wife and family back in Tokyo, Yukio, a man whom Komako claims to have been engaged to, and for whose sake she has become a geisha and Yoko, a girl who bears some undefined relationship to this man, and is posessed of a beauty that increasingly haunts Shimamura.

The tension is intense, and grows with each visit Shimamura makes to the snow country resort and Komako. Things have to come to a head, something has to be resolved - but they won't as long as Shimamura and Komako stagnate in their uncomfortable relationship, afraid to take it to the next level or to make a clean break. Finally, there is a stark, haunting resolution brought about by events beyond their own control.

A very elegant book, written with great feeling for visual richness and emotional depth without exessive verbiage. Despite the differences in culture that made some of it hard to understand at first, the universal appeal of this story shines through in the end.