Let me get one thing out of the way quickly: yes, I am uncomfortable with the casual racism of Sax Rohmer's original Fu Manchu novels. The constant reference to barbaric peoples, savage hoards and so forth do annoy me every time I take pause from breathlessly following a marvelously convoluted plot thread to reflect that he uses these epithets to refer to folks like me. But I'm not able to take it very seriously. 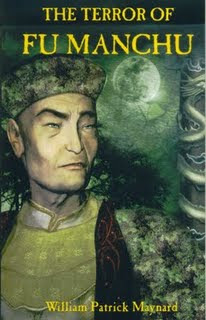 Even so, I'm glad that William Patrick Maynard's addition to the series, THE TERROR OF FU MANCHU, addresses this issue head-on. Maynard does not concede to post-facto sanitisation by winnowing out terms such as 'Chinaman', which the protagonists would naturally have used to describe their Chinese adversaries. However, he does offer a nuanced picture of the 'yellow peril' represented by the Si-Fan and their most dreaded operative, Fu Manchu, showing it as a larger clash between cultures, one in which the West was certainly not an innocent, virtuous victim. Fair enough. A modern-day addition to a franchise that is rightly or wrongly associated with some of the most derogatory depictions of Asians needs to take a stance in these matters, and Maynard strikes an ideal balance.

His book is also much more sexually frank - not explicit - than Rohmer's ever were. This, again, is a change for the better. There was something a little disturbing in the barely-repressed fascinated revulsion with which Rohmer hinted at the lascivious charms of various Asiatic temptresses. Maynard's frank treatment of the sexual angle is a breath of fresh air. It adds depth to the plot at times, and gives him the chance to weave in some rather kinky moments, which can only be to the good in putting together a pulp fiction adventure.

It's also a more philosophical book than I'm aware of the originals being - there's a certain dialogue between reason and faith (or spirituality) running through the book, and this is the aspect that I'm not completely comfortable with for reasons that I'll get to presently.

Now to the plot - it's a suitably labyrinthine creation, as not just the Si-Fan but also an esoteric order called the Brotherhood of the Magi scheme and counter-scheme to get hold of a precious magical artifact. Our old friends, Petrie and Smith deal with multiple murders, an ever-growing list of enemies and a complex mystery that takes them through the seamier side of London, a detour through Paris (where Gaston Max, another Rohmer creation, is encountered) and back. There's a brief nod to the Cthulhu mythos and all sorts of nice little touches (amongst other things, I think Maynard is hinting that Petrie's father is the noted real-world Egyptologist Flinders Petrie, a concept with immense potential for future Fu Manchu adventures). There's a series of cliffhangers, each more deadly than the previous one, and a positive excess of fiendish villains to grapple with. It's complex, convoluted and gripping.

SPOILERS AHEAD
What I'm less pleased with is the resolution, where Maynard seems to be hinting that the hand of god, to put it bluntly, rescues our heroes. Divine intervention is not a concept I want to debate philosophically; to each their own; but it is a somewhat disappointing way to resolve such an exciting plot. In fact, several things are left unresolved here - a fact acknowledged in the coda - which is fair enough in a sense. This is presented as a suppressed memoir of Petrie's, no doubt because of the various loose ends and secrets discussed within. Still, this resolution is of a piece with the philosophical thread that is occasionally alluded to in the novel and while a diabolical manifestation followed by miraculous deliverance is indeed a rather unequivocal way to resolve 'the churchman's dilemma', I'm not sure it's the best fictional device. In this sense, I always appreciated that, while GK Chesterton's Father Brown stories were, on some level, Catholic polemic (as everything that estimable gentleman ever wrote was), they achieve their ends by stripping away mysteries and the superstitious fears surrounding evil to present a rational solution to each mystery and thereby, no doubt, an assertion of the divinely ordered world of daylight and reason.
SPOILERS OVER

This caveat aside, I found this to be a most gripping and thrilling novel. Maynard is a plot-spinner in the grand pulp tradition and I look forward to reading further installments of fervid action and adventure from him.
Posted by JP at 08:36

Thank you for the excellent review, JP. The resolution where rationalist Petrie grapples with the supernatural was not intended to affirm a particular viewpoint. Most individuals embrace the belief-system of their culture, some choose another's, but Petrie does not have that option (in my version of the character) because he was raised to believe all religions are myth-making and therefore invalid. I did deliberately set out to make an argument, for the story's sake, of the existence of greater forces beyond current scientific explanation. The climax involves using the magic talisman. First a manifestation is occuring because of it and second it is contained because of it. It was not meant to endorse a particular belief-system and, indeed, Petrie is no more satisfied with his brush with the supernatural. There are no answers deliberately. What I wanted to give Petrie and the reader were questions. Had Petrie become a devout Christian at the end would have struck me as unrealistic and unsatisfying. I wanted to capture Rohmer's lifelong interests in the occult and place it in the context of an Edwardian Englishman with an uncommon (though still flawed) view of imperialism. All of that said, thank you for your excellent review. There was much food for thought within.

Thanks for your thoughtful response. You certainly did succeed in raising questions - and in raising Fu Manchu from literary limbo!