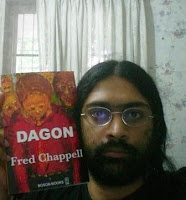 There's the cool, hip way to do cross-genre - steampunk, sleuths-and-spooks, noir-and-sorcery, elves and F-words. Then there's something like Fred Chappell's slim, harrowing 1968 novel 'Dagon'. It's like a dagger suspended in a void, gleaming in readiness for the longest time before dropping - but where?

It all begins when Peter Leland, a Protestant minister, and his wife Sheila travel to his grandparent's old house in the country, a house Leland has just inherited. In the opening pages of the book, Leland has an oddly disquieting time exploring the house. It conjures up vivid pictures of his Puritan roots:

He could see his male ancestry as grainy and rough as if they had all been hacked from stone. They didn't drink, didn't smoke; they didn't read, and all other books than the great black one were efficient instruments of Sathanas. The only fun they had was what he was living evidence of. -And very probably not. -He could imagine them, his whiskery forefathers, stalking wifeward to beget, stolid, unmoved as men readying themselves to slaughter hogs.

Leland has moved here to spend a holiday pursuing his researches on the cult of the maimed , fishlike fertility god Dagon. In a remarkable sermon that bores his congregation and bemuses his sharp, clever wife (a much-needed foil to his own gloomy passivity) he has unfolded his own picture of the history of this cult, from Biblical times to the early Puritan settlements in America. He claims that the cult of Dagon, the crippled, unreasoning god of dumb unreasoning impulse still lurks in modern America with its sexual freedom and consumerist excess. A reasonable stance for a Puritan preacher take as a metaphor - but it seems that Leland somehow takes his thesis literally.

At his grandparents' estate, Leland meets the Morgans, a family of tenant farmers; a brutish, ugly backwoods clan whose daughter, Mina, nevertheless exerts a strange fascination over him.

It was impossible. That body so stubby and that face so flatly ugly - something undeniably fishlike about it - and still, still it exercised upon him immediately an attraction, the fascination he might have in watching a snake uncoil itself lazily and curl along the ground.

Leland slips into a passive, haunted daze, as if the weight of his family's past has become a crippling burden in this, his first home. He has completely left aside his Dagon research, prying through the old things in this house whose very angles somehow seem wrong, yet compelling. He finds old letters in which strange words in unknown languages - names like Cthulhu and Yogg Sothoth - alternate with what at first seem like the prosaic exchanges of parsimonious Puritans with their crabbed faith. Leland has a traumatic experience in the attic, where he finds chains and manacles, which he manages to trap himself in. As he waits for his wife to find and free him, he has visions - repressed childhood memories? - of seeing his father die, shackled and chained in this very room. He sees visions of Mina:

She had no nose, Mina, any more than a fish. She deeped in oceans of semen.

When his wife finally finds him and helps him free himself, she explodes in rage and tells him that his behaviour is bothering her. This obsession of his with the house is unhealthy - he seems to actively dislike something about the place, yet he can't pull himself away. Leland and Sheila become increasingly alienated, as Leland subsides further into his strange fascinations and Sheila watches, horrified. Finally, Leland resolves to kill her, to sever this link with the life that he has built for himself away from his native place with its weight of dark secrets and strange, obscure obsessions.

What follows is a harrowing descent into squalor, depravity and torture as Leland gives himself totally over into the hands of Mina, the squat, fish-smelling temptress. She leads him into a nightmare world of pain and humiliation, drags him across the countryside to be the sacrificial goat in a bizarre, macabre dance of degradation. Again, Leland sees traces of the hidden American cult of Dagon.

They passed drive-in movies, and the great flat faces of strangers fluttered away in the darkness; they were quickly oppressive, these visions of bright love and violence, a tipsy staggered glimpse of the secret heart of the land.


Chappell chronicles Leland's increasing absorption into a strange mental trap with original and vivid imagery, expressed in subtle, precise language. Here is a dream Leland has:

...he was a spider; no, a daddy longlegs. He scoured in jagged lines over the fields, searching out water with an unerring hunger. His size was proetan; grew monstrously; diminished. On the skin of the great water, when he found it, he would drift in coolness, the big overhanging leaves of the weeping willow would keep away the sunlight. The soft fields were singing softly. In the harsh embittering dream was a peaceful dream, of waters shot with healthy shadows, of the rounded spaces under trees enclosing as with cool arms.But in the heated fields his six-legged body was painful, crazy...

In Indian mysticism, the Aghora initiates follow a paradoxical path to enlightenment. They strip away the chains of maya by revelling in excess, in the fleshy matter of this transient mundane life. Necrophilia to them is not a perversion but a way of learning, in the gut and in the cells, that we are all born to die, and to cleave unto one another is to chain yourself to a corpse when salvation lies elsewhere. It is called the left hand path to god.

Sensing a deep corruption in the American fabric, Leland thinks he has discovered traces of a cult that worships corrupt, old gods. We always profess to hate what we most fear to find in ourselves; the Puritan stance always concealed as much sin and filth as the Victorian veneer. There is a strain of this same striving after mindless, brute impulse in Leland's heritage, expressed in secret visions, perversions and practices. Why would someone have man-sized chains in their attic? In Chappell's narrative, Leland literally and figuratively thrusts himself into these chains, becoming a passive spectator of his own downfall, watching as all the tempations of the flesh - sex, alcohol, even simple animal comfort and warmth - are stripped away from him and his life becomes a routine of suffering. It is as if, like an Aghora, he is seeking to be transfigured through excess. But Chappell seems to suggest that Leland's final goal is not to refute human nature, but to grasp it by rising above it, for a better vantage point. In the final pages of the book, Leland confronts Dagon, the crippled, hideous fertility god - and finds that he can withstand him because Dagon has instinct, but no brain. With his appetites sliced away, Leland's intellect can weather this confrontation, and rise from the sacrifice that follows into a new plane of existence.

He understood suffering now and the purpose of suffering. In an almost totally insentient cosmos only human feeling is interesting or relevant to what the soul searches for...suffering is the most expensive of human emotions, but it is the most intense and precious of them, because suffering most efficiently humanizes the unfeeling universe.

This is a far cry from the hipster frippery of Cthulhu-meets-
Posted by JP at 07:19