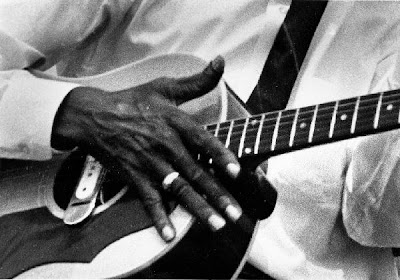 You see that hand there, in the picture above, slapping a guitar? That's Sam 'Lightnin' Hopkins' left hand, arguably one of the most formidably steady grooving rhythmic weapons to ever attack the blues, whether strumming an insistent one-two beat, picking a silvery flutter of lead guitar licks or even slapping the box of the guitar in percussive rapture. Hopkins' style hardly changed at all in a career that spanned 6 decades. You could accuse him of basically recycling the same riffs and licks with different lyrics - but you could say that about a lot of blues artists. Maybe this is my techno, but I love tripping on the iterative consistency and subtle variation of a great blues artists' body of work - and Hopkins certainly fits the bill.

Today would have been Hopkins' 96th birthday. A good time to remember him, because his music still sounds just about as alive and kicking as anything can be.

One of my favourite Lightnin' Hopkins songs is Coffee For Mama, a song about a couple squabbling over the husband's failure to get coffee for mama, constantly distracted as he is by god knows what disreputable diversions. This version is from Hopkins' classic 1960 album, Mojo Hand. Give it a listen and if you like, go find, maybe even buy, some more Hopkins music. Cheers.

Today's also the birthday of Ry Cooder, still very much alive. He's the guy who backed up Richards-and-whoever's rock n' roll guitar assault in the Rolling Stones with rootsy slide guitar and mandolin, only for a while, but on two of the Stones' most enduring albums. He's also dipped into disparate musical traditions, with the Cuban musicians on Buena Vista Social Club, and with Indian musician Vishwa Mohan Bhatt. His latest album, My Name Is Buddy, recreates the politics and the music of depression-era USA, through the eyes of a blue-collar cat and his friends, including a mouse and a frog. A sort of pro-proletarian Disney concept as Woody Guthrie would have done it, if you can imagine such a thing. Here's the title track off this album. If you like it, the CD's out in stores, you know - that's where I got my copy. 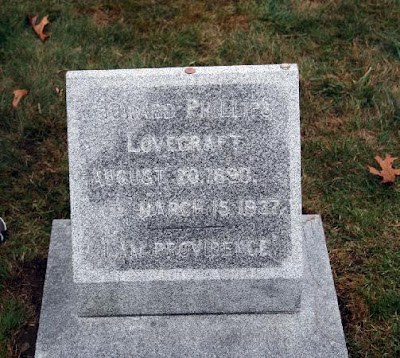 This also the day on which Howard Phillips Lovecraft died, in 1937, after a short (he was only 47), largely lonely life, enlivened socially by an extensive correspendence with like-minded acquaintances, spent mostly in the company of aged relatives, apart from a short stint living in New York, during which he met several of his pen pals, and even entered into a short-lived marriage. He was always beset with financial troubles, living a life of genteel poverty and discrete starvation, interested only the stars, the past, and the weird. He loved cats and ice cream, had an almost pathological dislike of seafood and once wrote about himself:

'I should describe mine own nature as tripartite, my interests consisting of three parallel and dissociated groups – (a) Love of the strange and the fantastic. (b) Love of the abstract truth and of scientific logick. (c) Love of the ancient and the permanent. Sundry combinations of these strains will probably account for all my odd tastes and eccentricities.'

But what best speak for him are his weird, resonant tales of horrific fiction, wildly influential and still a high-water mark for the horror genre. You can read some of them here. If you want to read more, there are lots of great compilations out there with introductions by people like Joyce Carol Oates (insightful intro and a great selection too), Neil Gaiman (high-rent fanboy gush, someone else selected the stories in the collection) and ST Joshi (authoritative and scholarly introduction and selection, copious notes).
Posted by JP at 09:18

Welcome to the dollhouse. :)

HPL was goodlooking too.

I see that you are trying to not promote illegal consumption of art. The conclave had a session on this. But too long to discuss here; I save it for later.

The only thing that should be illeagal is mediocre art. But then the jails would have no room for pickpockets and sodomisers anymore.

But that looks like his right hand, good sir... ;)
And yes, mediocre art be damned!

Heh, my southpaw bias is showing. I automatically think of the fretting hand as the right hand and the plucking/strumming hand as the left hand. A bit of a drawback in this dexteronormative culture.