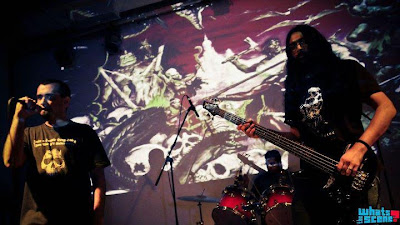 I fear for my sanity.


The things I have seen would make a stronger man weep like a little child and scream like a banshee who has caught her thumb in a doorjamb.


It all began that fateful day when, immersed in my studies, I stumbled over the threshold of the Forbidden Manuscript room in my college, Miskatonic University. I wasn’t much for the musty old scrolls and tomes in there; structural engineering was more my line. But, having wandered in, something about the timeless, eerie atmosphere in the room made me linger. I strolled here  and there, perusing hoary old alchemical almanacs and occult treatises, things with long, Latinate titles and illustrations of strange geometrical forms and demons with quaint little horns and tails.


Then, I stumbled upon the dreaded Necronomicon, that fabled compendium of the most unhallowed secrets of space and time, written by the Mad Arab, Abdul Al-Hazrad, he whose name is abomination to this very day. With my analytical mind and speed-reading techniques, I rapidly realized that even this text was only a gateway to another, more diabolical secret book; an Unholy of Unholies. The Book Of The Djinn.


I do not know what spark of madness had slumbered all these years in my rational, workaday mind, waiting to be fanned into a raging flame of obsessive insanity. Perhaps there was some flaw in the physical structure of my mind, perhaps some loathsome practitioner of dark arts lurked in some distant branch of my family tree, perhaps my mother dropped me on my head as an infant while laughing out loud upon perusing the horoscope section of the newspaper; I shall never know.


I do know that, from that moment, I could not rest until I had to read The Book Of The Djinn. Thus began a decade-long quest that took me from my native clime to the furthest reaches of the globe, from a cattle farm in Central Africa to an abandoned mine in Rhodesia, from the icy northern shores of Iceland to the Japan Sea and beyond.


Finally, I found the tome I sought in a cave high in the Himalayas, amidst barren rock and thick snow. Three chambers did I uncover, smashing stout doors of an indefinable substance to pass within, before at last I entered into the fourth, innermost chamber. Without pausing to explore the outer chambers, I read the long-sought-after book. I found therein a tale of the utmost brutality and strangeness, a tale of three beings, known collectively as The Djinn, although they had nothing in common with the Arabic imps who go by that name. These were three creatures of vast, cosmic evil whose very existence proved that the universe was little more than a largely empty bag of swirling molecules, governed ultimately by chaos but momentarily by three savage beings who stood atop the eldritch pantheon already revealed in the Necronomicon, lying dust-covered back there in dear old Miskatonic University.


They were: The Hitter Of Things; a massive, powerful creature who sought to remake the universe to the rhythm of his own percussive assaults. The Rumbler Beneath: a conniving, insidious behemoth who tortured the very fabric of reality with his subsonic imprecations. The Bellower Of Abomination, a colossal leviathan, crooning and ululating foul words of madness and ultimate disruption.


My fear and misgivings grew stronger and stronger as I learned how even Hasthur and Cthulhu had joined hands to chain these three terrible creatures in some fastness tucked away in a then-obscure corner of the universe, high atop a snow-capped mountain. A strange sense of déjà vu overcame me and as I compared the symbols in those ancient pages with the etchings on the doors I had so carelessly smashed through, I realized the awful truth.


I had released the Three Most Dread, unleashed them on an unsuspecting universe.


I fear for my sanity. I fear for my life. I know that they are sending their minions to deal with me even as I write these words.


I beg of you, heed my words and learn from them.


I beseech you, do not listen to their songs of madness and dissolution.

that was delicious jp.

djinn & miskatonic - i want to listen them already.

p.s. if the three creatures together are known as djinn, why don't they simply call themselves djinn? in other words why '& miskatonic'?

Because, in their new avatar, the eldritch lethe-waters of the Misatonic river have been added to the ichor in their veins, by a process that shall be detailed in further installments - that is, if your humble narrator is allowed to live to tell the tale!

There is a link to one of our songs in the post directly below, by the way.