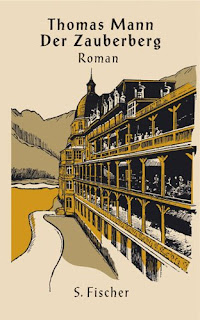 Thomas Mann may have been self-important and arrogant - qualities for which he is given short shrift in Javier Marias' excellent, opinionated collection of literary thumbnail sketches, Written Lives - and perhaps entirely too aware of the character of certain of his books as 'important novels'. As far as I know none of these qualities preclude him from having actually produced work worthy of his sense of importance.

It is tempting to call The Magic Mountain an allegory. The characters seem to depict clear-cut schools of thought - Settembrini, the revolution-mongering, humane, austere humanist, Naphta, the reason-denying, reactionary, voluptuary mystic, Clavdia Chauchat, the apposite, alluring feminine sprite, Joachim, the duty-bound honourable, one-dimensional soldier, Meinheer Peeperkorn, the charismatic, conservative, romantic man of action, to say nothing of Hans Castorp, the willing pupil, the tabula rasa on which time and history will write their testaments of conflict and doom.

Mann himself notes with approval a comparison made in the critical literature to the grail legend. And indeed, Castorp is in many ways the archetypal holy fool on a quest perilous. But it is also a portrait of a specific moment in time, peopled with realistic characters and settings. So this is not the never-never land allegory of the fabulist. Instead, it is a novel which dares to make the claim that its characters and its little incidents are not just themselves but indicative of larger themes and currents as well.

The events of The Magic Mountain take place in a world on the brink. There is a struggle between 18th century humanist values and an ages-old yet brand-new radical retreat to the familiar fundamentals of a pre-Enlightenment hegemony of febrile mysticism. Europe stands at a crossroads, worked upon by opposing forces, clinging to opposing views of the past, torn between opposing views of the future, and it only takes one act of violence to signal the plunge into decades of world war, interrupted by uneasy peace in the 20s and 30s, and ended only when new, non-European forces were to take control of matters and shape a world that would bear little resemblance to the verities of imperial Europe.

It's not an unrelievedly serious book though. Mann initially planned it as a satire on life in the many sanatoria of pre-world war Europe, and there are scenes where a certain antic humour intrudes. And while, much of it is dominated by discussions between Castorp and his many would-be mentors and advisors, there is also a sequence of action that has great symbolic consequence, as Castorp wanders lost in a snowstorm and falls into a dream that may well contain the central philosophical message of the book. Even if much of the book is talk and exposition, there are, in addition to this sequence, perhaps another three or four memorable scenes in the usual sense that mark important beats in the story and phases in the argument.

It is almost impossible to summarise this book in any but the most rudimentary way. I won't even try. And while it might seem that the conflicts epitomised here belonged to a specific period of time, the fact remains that in a world where the forces of reaction and retreat still strive for the upper hand over humanity, nothing contained herein is in any real sense outdated. And yes, pompous though Mann may or may not have been, his characterisation of his novel as one that needs to be read at least twice seems justified. That's certainly what I intend to .
Posted by JP at 13:57