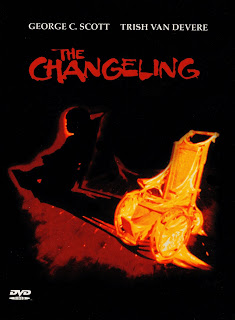 The more violent the irruption of the numinous, good or bad, into a narrative is, the more necessary it becomes for the narrative to be rooted in the loam of everyday human aspiration and emotion. Stephen King's hoary horrors sell the way they do because he always takes the time to build his characters and their small-time lives to the extent that we momentarily mistake them for foreground; then the bad shit breaks out.

Another way to anchor a tale of supernatural terror is to hinge it on some human act of horrific proportions; this is the method of many a classic ghost story. So many of M.R. James' apparitions are doomed to remain in their spectral state as the consequence of some horrible act that operated in the purely mundane realm.

The Changeling, a 1980 film directed by Peter Medak deploys both strategies. The story begins with a man stuck in a phone booth, unable to intervene, watching as an out-of-control automobile smashes his wife and child to death. We learn that the grieving widower is John Russell, a composer; that he has taken up an assignment as a lecturer in a Seattle university soon afterward. He leases an historic mansion, a beautiful place with wooden floors, vast, gracious halls and a music room with a grand piano. As he tries to work on the elusive second movement of his latest composition, he finds a melody presenting itself to him; things seem to be working out.

But there are strange disturbances in this house. And this is where this movie, ever so slightly, overstates its case: I could have done without some elements of this build-up. The dripping tap, the door that seems to open or close on its own, the ever-so-spooky sound effects. But these elements stand out as much as they do because of the excellence of everything else - the deliberate pacing, the dignified and empathetic presence of the lead actor, the cleverly played double- or triple-herring where we are made to believe that the haunting - for haunting it surely is and not just an old furnace with odd habits, as the building's caretaker claims - might be by Russell's daughter, or by the daughter of a former resident, a girl who died in a road accident that strikingly parallels the death of Russell's daughter. This confusion is good; we are right to be confused and mistaken when first confronted by the supernatural.

The word 'occult' is often used loosely as a synonym for 'the supernatural'. It's a good word; it means 'secret', and most good tales of terror hinge on the unraveling of some secret that would have been better left alone. It's no accident that Poe, father of the Anglophone detective story was also a master of the tale of terror, or that Arthur Conan Doyle also wrote a mean ghost story and eventually became a believer himself. And the narrative in The Changeling soon follows the course of an investigation. First there is a seance, which feels like a bit too much at first, an overly credulous gesture. Then it takes a truly creepy turn, exposing a secret that was not previously suspected. The weight of this revelation, and the way it is delivered, its impact on Russell is what gives this otherwise rather hokey device substance: once the whole horror of what happened in 1909 in the attic room of this house dawns on Russell, he physically collapses. It's the casualness that so many B-movie protagonists show in the face of terror that deflates those narratives; Medak dodges that bullet, even if he succumbs to a few more creepy-flick cliches than he needed to have.

The rest of the move builds frantically, in the honoured tradition of the best (and worst) films of the genre. Although the supernatural manifestations grow in force and virulence, the impact of the horrible human act that started it all is underscored in a pivotal scene featuring the titular changeling, played marvelously by an aging Melvyn Douglas. It's the bitter, tortured weight of his character's guiltless complicity that serves as a counterpart to the child-spirit's final act of vengeance and destruction. Not a simple drama of good versus evil, in its final act, this story leaves us with no simple moral truths - although I'm willing to concede that some of this ambiguity may stem from my own analysis of the changeling's complicity rather than the writers' intentions.

There are moments along the way where it nearly tips over, this delicately-balanced tale of horror and its terrific consequences. There are, as I've said, a few too many instances of the standard devices and tropisms of this sort of film being trotted out. And yet, the moment Russell moves into his Seattle mansion, I felt a cold, icy breath run down my spine, and a sort of hushed foreboding took hold of me. This movie gripped and even, at times, scared me as few horror films have lately and I heartily recommend it to connoisseurs of the more subtle cinematic chills.

Here is a scene that illustrates both this film's brilliant sense of pacing and how it cannot fully escape standard haunted-house mechanisms:

I loved every bit of the build up of the horror. It was overdone at times but still..lovely!!

Hm, I was left a lot less impressed than you were by this film, JP. I found the cliches a little more grating and apart from the opening scene which was remarkable in its rapid change of mood and tenor, the rest stellar performances notwithstanding, plodded on hitting every cliche in the book. The other part of the film that I really liked was the confrontation which was spectacular. Grah a meeting beckons. More later