The Story Behind: Aranya's Last Voyage

The next issue of the Australian spec-fic magazine, Andromeda Spaceways, will include my story 'To Stand And Stare'. As a build-up to this, I'm doing a series of posts where I link to previous stories of mine that are available online and share a bit about the creation of each story. First up: Aranya's Last Voyage.

I often suspect I'll never write a novel because it takes me years to write a short story.

This is only half-true.

In actual fact, once I've found the right combination of plot, theme, setting and narrator for a story, it takes a week or two of concentrated effort to get the damn thing down.

Getting all those elements aligned just so is what seems to take years. 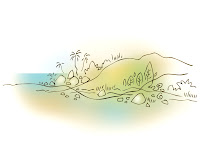 I first had the idea for the story that would become Aranya's Last Voyage in a dream, sometime in 2005. I had this vision of people alighting on a world where their imagination could shape reality. I saw them eagerly using their imaginations to reshape the world around them. Only one of them chose to turn away, return to his craft and speed away from this place. I woke up suffused with the wonder of a place where you can reshape reality any way you want, and wondering why that one person turned their back on it.

I first tried to answer this question with a science fiction story entitled Newspace. It began with a series of stylistic flourishes that I am still very proud of, but the problem was that it rapidly fell into the standard strange-planet-visited-by-exploration-team stylistics we've all encountered in so many Star Trek episodes and Golden Age SF stories.

When it comes to hardcore SF, it takes someone with the wide reading and theoretical grounding of Adam Roberts, or the genre credentials and scientific knowledge of Stephen Baxter to be able convincingly deliver a new twist on an old tale. I read a lot of science fiction, but I haven't seriously contemplated writing it ever since I read Ted Chiang's short stories and realised two things: it wasn't worth writing science fiction unless I could write it like this, and that I just didn't have the extrapolative rigour or scientific orientation to write like him.

So Newspace floundered and was never completed, even though I'd even penned the titles for a series of sequel tales in a notebook. I had a vague of idea of turning the whole sequence into a sort of environmental parable, on broadly similar lines to Ursula K. LeGuin's The Word For World Is Forest. I didn't really do anything further with it because I think I knew even then that I didn't have the toolkit to write that sort of science fiction.

Also, I still hadn't figured out my breakaway character's motivation. That came from a re-read of James Blish's A Case Of Conscience, a novel where a priest encounters an alien race that he admires, but which also has no religion at all, precipitating a deep crisis of conscience. Like Blish, I am an atheist, but I liked the idea of a compassionate, questing yet deeply committed believer coming face to face with a situation that is at odds with his beliefs. Faith is basically a conceptual framework and I realised that eventually my story was going to be about how much we should or can impose our own frameworks on the world, and whether it really makes a difference in the long term. Predictably, my conclusions are somewhat pessimistic. 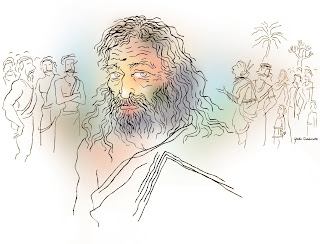 Finally, I realised that instead of trying to write about a space-going priest, and finding a theological conflict that would fit the bill, it would be easier to set the whole tale in a fantasy world where a society ruled by a priestly class is embarking on a phase of exploration and discovery. Once I named my lead character Aranya, the story seemed to begin telling itself.

The first draft had already crossed 5000 words when I heard of the Sunday Herald contest with its 5000-word limit. I did a new draft keeping this word limit in mind, and I think it worked to the story's advantage, and to mine as a writer: it helped me develop a certain compressed but still vivid style that serves as a tool to get a story down before running out of steam while providing enough cues to expand on if needed. In fact, I'd like to rewrite this story a little at some point, expunging infelicities and fleshing out some details. Still, it's not a bad little story as it stands and I hope you enjoy it.

(Original illustrations in this piece were drawn by Yathi Siddakatte for Sunday Herald)
Posted by JP at 13:51